When using GitHub Actions, the default is to use the Semantic Versions for which the actions where released. Semantic versioning (SemVer) is an industry wide standard of giving meaning to the version number. SemVer always follows this setup:

Given a version number you increment the:

What the runner does with semantic versioning of using GitHub Actions

The runner that executes GitHub Actions for us is open source. You can check the source code for it here. If you dive into it, you can find that the runner tries to download the version from the Action you specified:

You can find the code with it makes the download link here. The runner then calls the REST API to download a tarball of the repo (or on a non-Windows host the zipfile of the repo).

If the TAG (or branch or SHA hash) you have specified is not available in the repo, the runner will give an error saying it cannot find that version.

Now the interesting thing is what happens if you specify a semantic versioning pattern for an action. For example:

Following semantic versioning, you’d expect that this example would work. Configuring actions with a version (or tag, or hash) is required these days so the runner can find the correct reference to download. That means that the maintainer of the action MUST follow SemVer when releasing their actions, as also described in the GitHub Actions documentation. If the maintainer does not follow SemVer, the runner will not be able to find the correct version to download.

Now guess again what happens when you specify version v3.1 for the checkout action. The runner will try to download the repo with TAG = v3.1. But that tag does not exist! The runner will then give an error saying it cannot find that version. So the runner does not check for matching versions by itself!

You can find the tags for this action here and see that v3.1 is missing! So even the most used action, does not follow GitHub’s best practices!!!

Even better, the GitHub Actions Marketplace actually does not show the version from the tags: it only shows the information from Releases in the repo! That means you could be missing out on tags that where not released as a GitHub Release. 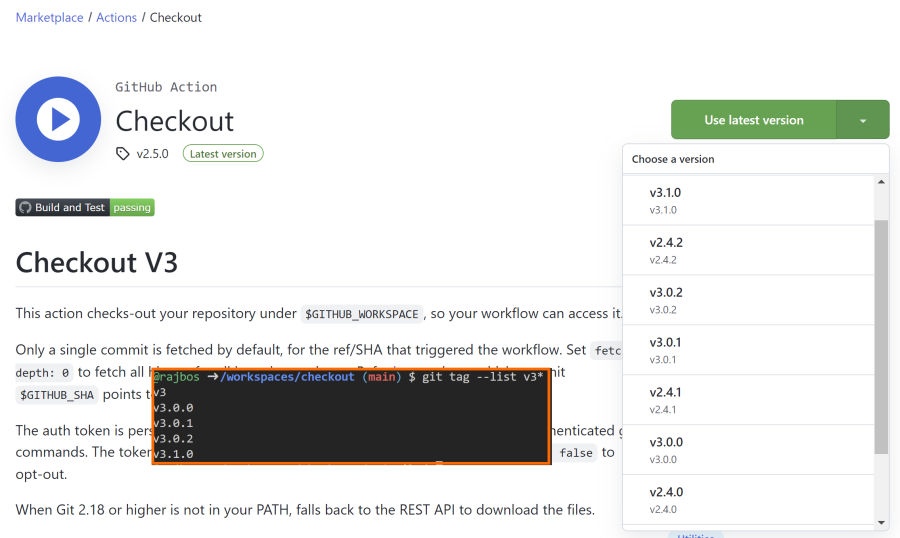 We keep telling people to follow SemVer for a reason, but for GitHub Actions the honus is on the maintainer of the action to actually re-tag all matching versions of their action with the correct SemVer version. And apparently, even GitHub doesn’t follow along with this.

So when you have a current release v4.2.5, you also need to re-tag that commit with the v4.2 tag, as well as the v4 tag. This way the runner can find the correct version to download.